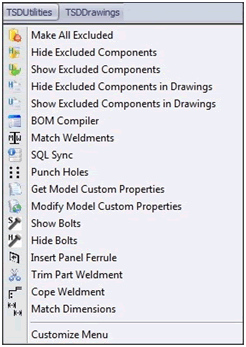 The Steel Detailer contains a lot of smart ways of making your projects run faster. Imagine having all of your steelwork BOM automatically filled. Never to type them in again.

Hiding Components that have been excluded from the BOM in drawing views allows the user to create templates of drawings for member library models.

Currently with solidworks there are two distinct BOM'S. A standard Assembly BOM and a cut list for weldments.

The BOM Compiler goes through the project and gets weldments in a single part and copies the section cut list data to the part custom properties to fill in the Assembly BOM.

All plates are measured for size and compared with flat bars and plates. If the plate is a standard flat bar it is added to the BOM. ie 75x6 FL, othewise it is nominated as a plate. ie 79x6 PL

Solidworks gives the basic weldment select and insert, but nothing to make two weldments identical until now. The Steel Detailer allows the user to select two weldments and match them. This is a really good tool if you are matching connection weldments with member weldments.

The SQL Sync syncs between the SolidWorks Area Assembly and the database. This automatically runs after the mouse has been sitting idle for 10 minutes.

By selecting the back of a plate and the opposite side of a mating part or another plate the punch holes function does just that by converting entities in-context with the mating member, punching all holes.

If the plates hole centres change or the hole sizes change, so does the mating part due to the in-context relationship.

There are a myriad of marking systems out there and this function helps deal with that.

By naming your own field or use the default field ‘MARK’ a user can set their own marking system within the SolidWorks parts and assemblies.

All bolts that are virtual components are shown. Be careful using this on a large assembly as it may take a while.

All bolts that are virtual components are hidden. Just like show bolts, be careful using this on a large assembly as it may take a while.

This feature matches the holes on the part that is connecting to the component to which the bolts need to be inserted.

This feature is used to trim in a member to another. This feature uses a plane in-context of the part to which Assembly the Part is defined in.

Allows trimming of two members, similar to a weldment trim used in weldments. The difference is that this is a part level feature used at Assembly level and allows clearance.